You are here: Home / Blog / News / Retail Expansion in Bucharest

“GEOMATRIX, is available and operational in Romania since 2016.”

The retail market in Romania was characterized in 2016 by a high volume of delivered spaces and entry of new brands, which opened their first shops both in already existing shopping centers and in recently opened projects.

Mostly used by the majority of retailers, is the integration of latest official statistics at the lowest administrative level, for Bucharest – National Institute of Statistics (Romania). For instance, in Bucharest, the city is divided in 6 administrative areas, as you can see in the table.

The most promising areas with a high population density will be District 3, where you could find 474 586 potential customers. 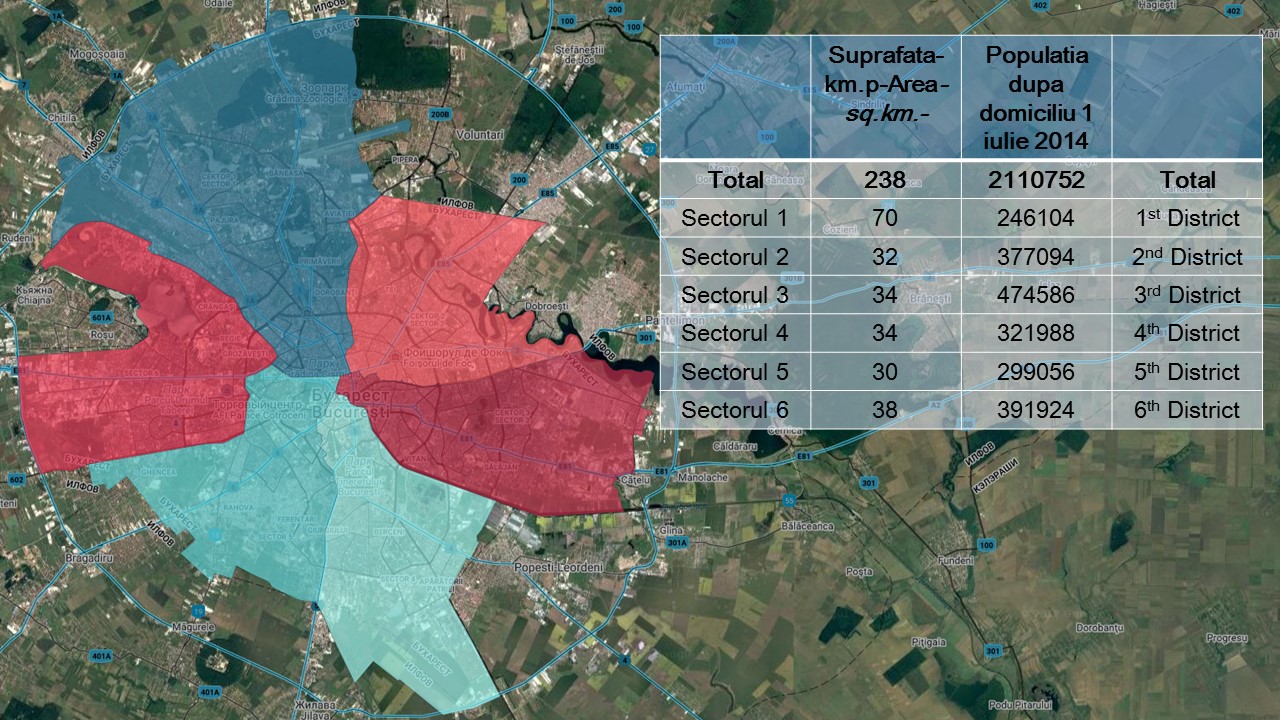 For the analysis of potential locations, in some cities with a lage number of administrative areas (such as London or Paris) it is sufficient to use only national statistics, while in others (such as Bucharest with only 6 districts) it is preferable to use a more detailed analysis. For example, in Bucharest, after analyzing 91 570 houses that were divided into 1 568 microzones  with the average population by micro-zone of 1 695 people, it is possible to identify the most populated zones with a highest population – 10 087 people. This analysis allows retailers to spot the best street retail locations within micro-zones in chosen cities. 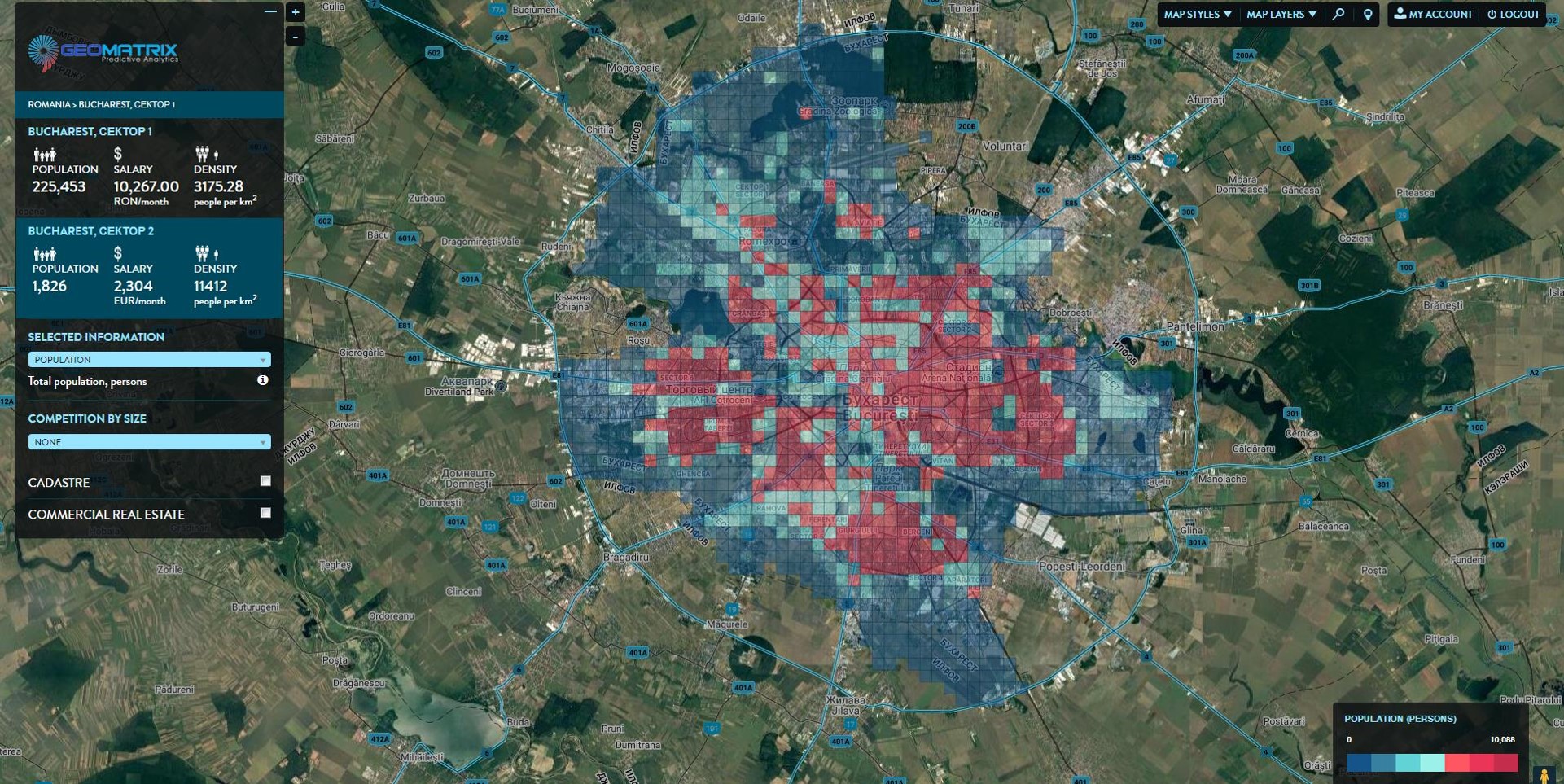 One of the most interesting indicators is the density of mobile devices geo-signals. In each micro zone we gather data about the number of geo-signals for a specific interval of time, in order to analyze the active population density in our micro-zones.

Bucharest Micro-zones. Zones are distributed by density of geo-signals from mobile devices

Apart from using only official statistics data for one’s expansion process, we will present two approaches to analyze a new store potential location that can benefit your business in today’s fast-growing city of Bucharest.

In the example, Carrefour Romania, one of the leading food retailer wanted to find out the best places for a new outlet, which they planned to open in the new areas in Bucharest. We compared their current locations, and then integrated demographic data, median household incomes, average salaries and accessibility data, limiting the area to 15 minutes by foot. 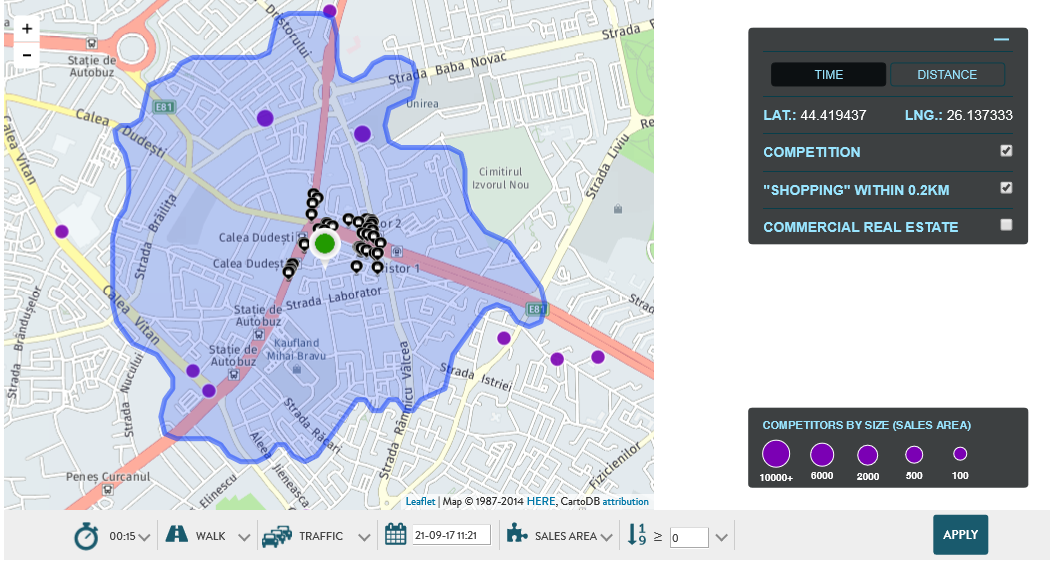 As a result, there were two suitable areas, which can be compared by the number of permanent population, by the presence of possible competitors and the expected annual turnover, which will eventually allow choosing the best potential location in few seconds to open a new outlet.

Finally, we would recommend between those two locations to select firstly the Șoseaua Mihai Bravu 2 based on the highest number of potential customers and the smaller number of competitors.

It should be noted that one of the most common mistake in choosing a method of estimating a sales point is to estimate only one location. After all, the ultimate goal of all, even the most complex techniques, is to identify from several different proposals the best object, which has the maximum potential. 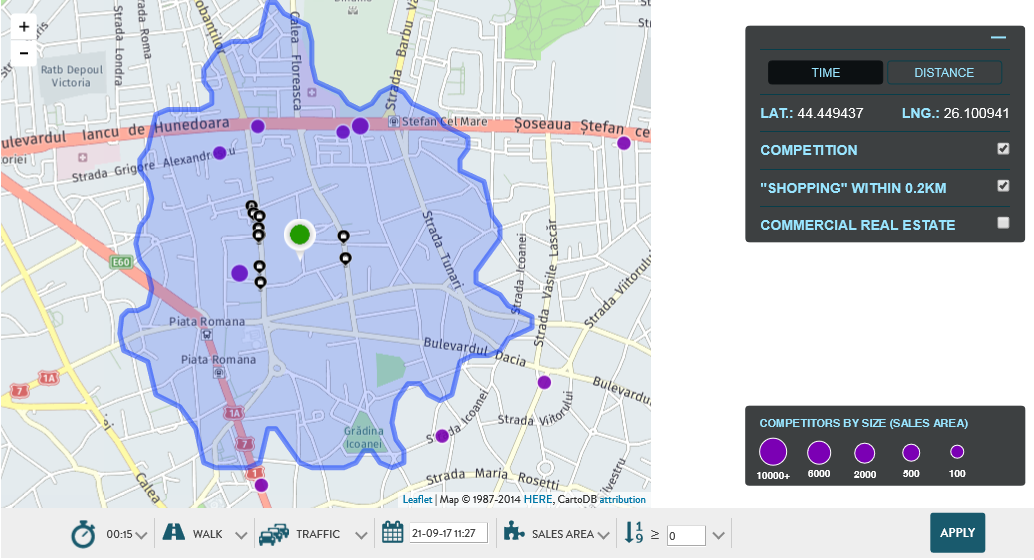 Accessibility area studies show very pertinent results in order to screen, rank, and select best options between several potential locations. Nevertheless, when arises the need to determinate the potential traffic and turnover of a retail outlet, more robust analytics should be used, such as catchment area analysis.

The zone graphically displays the territory within which you can reach the estimated location for a fixed time, taking into account the traffic jams and the road graph. You immediately see if you can get to the location on foot from the subway, or get by car at rush hour. The system will estimate the number of people permanently residing in this zone and the number of potential customers between them. 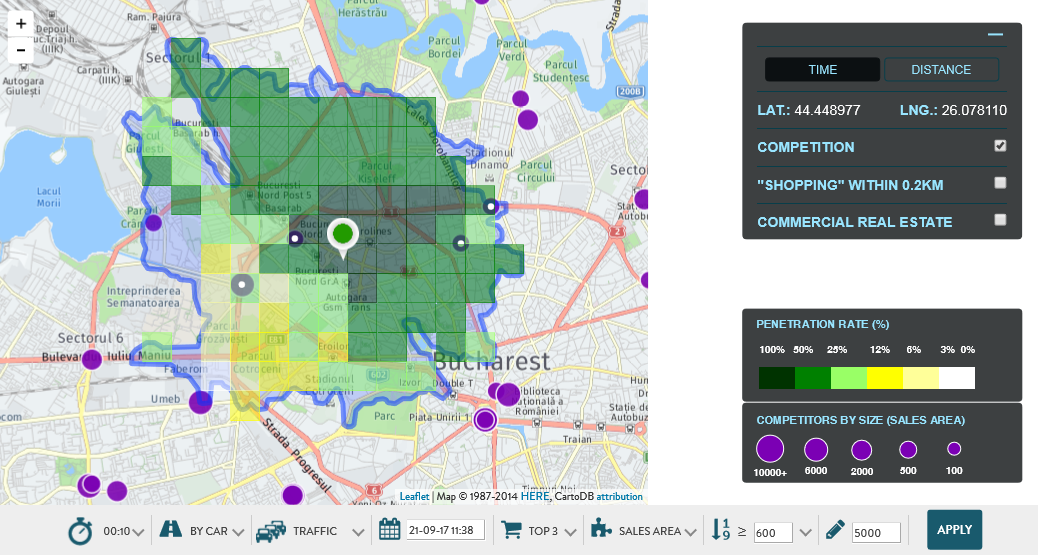 All food stores are divided into three status: existing, under construction and projected. This allows us to see not only the current situation when assessing new objects, but also to predict the future. What’s more the system can be customized to your format and vision of the market.

The system allows you to combine on one map data on the density of the permanent population with information about the location of shopping centers and their size. Even without creating additional reports, this makes it much easier to assess the location of objects.

Finally the assessment of project’s potential with the help of gravitational model allows you to get an accurate estimate of the effectiveness of location in relation to competitors and the forecast of potential turnover and attendance of supermarkets, hypermarkets, shopping centers.

Stop loosing you time, assess the location of competitors’ outlets and the distribution of population density in the city, in the region or across the country and benefit from GEOMATRIX: