Big Data and Demographics in Russia

You are here: Home / Blog / News / Big Data and Demographics in Russia

Press Release, Moscow, 03/08/2014: Big Data and Demographics: where population in Russia grows and where it shrinks.

Following the example of the German Federal Institute for Research on Building, Urban Affairs and Spatial Development (BBSR), RILOS conducted an analysis to identify the growth and reduction of the population in the Russian Federation.

RILOS’s cartographers team analysed the population dynamics within Russian Federation, based on official open data from Rosreestr (2011 administrative boundaries) and GosKomStat (2002 and 2010 census).

The population in 2010 in comparison with 2002 decreased by 2,310,195 people and consisted of 142,856,536 people. The decline occurred in 62 subjects of the Russian Federation. Changes with the worst outcome were fixed in  Altay region (-7,2%) and Sverdlovsk region(-4,2%). The main reasons for this decrease was a natural decline as well as a population outflow. The population increased in 21 subjects of the Russian Federation. The highest growth was recorded in subjects with high birth rates such as the Republic of Dagestan (+ 13%), as well as subjects that attract most of the migrants such as Moscow (+ 10.8%) and the Moscow Region (+ 7.2%).

Map 1:  Population dynamics on the level of Russian Federation’s subjects 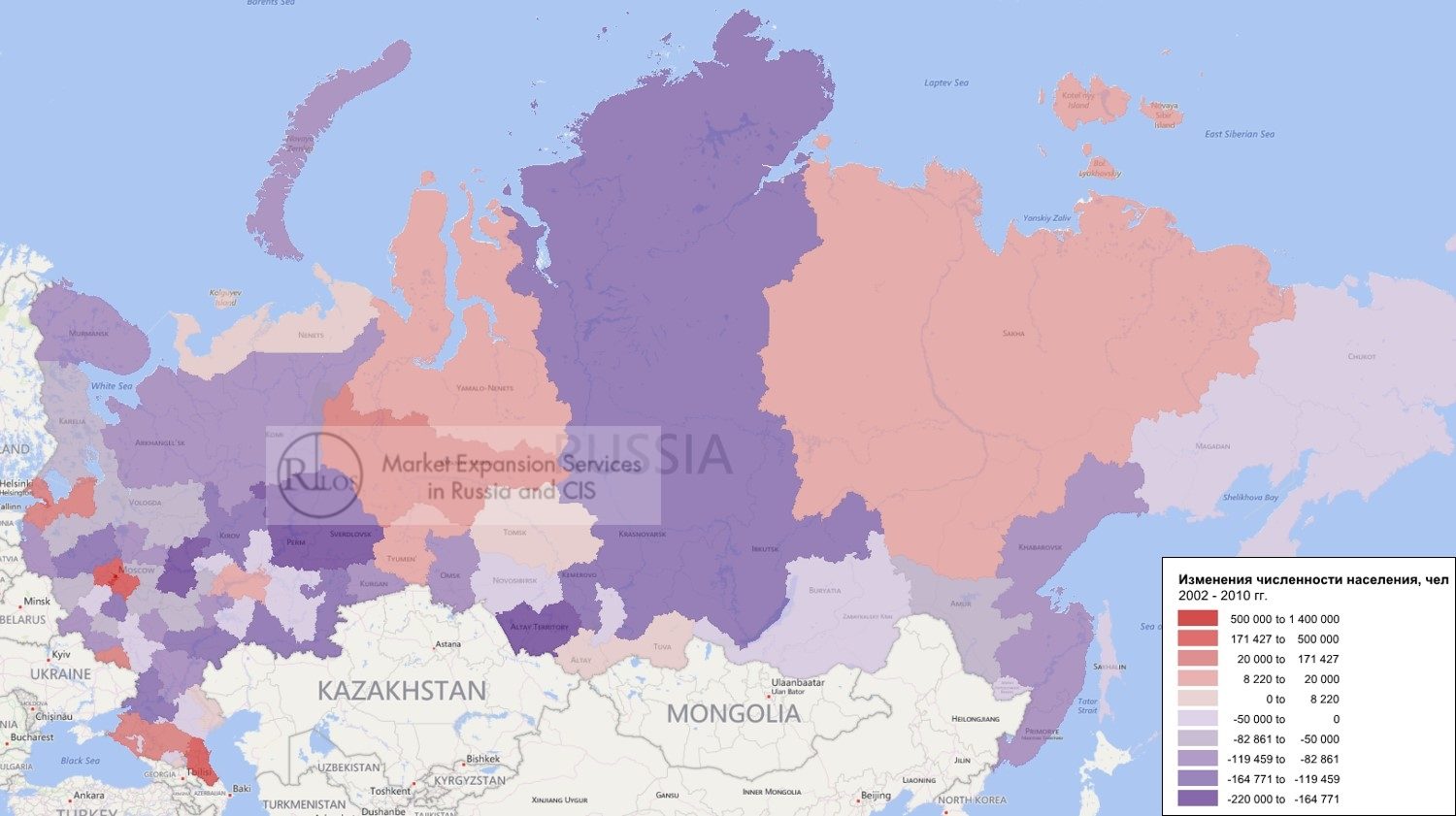 A more detailed analysis of the dynamics of the population was carried out at the level of cities, districts, towns and villages. There used to be 4,854 official administrative-territorial units according to the census of 2002 and 2010. 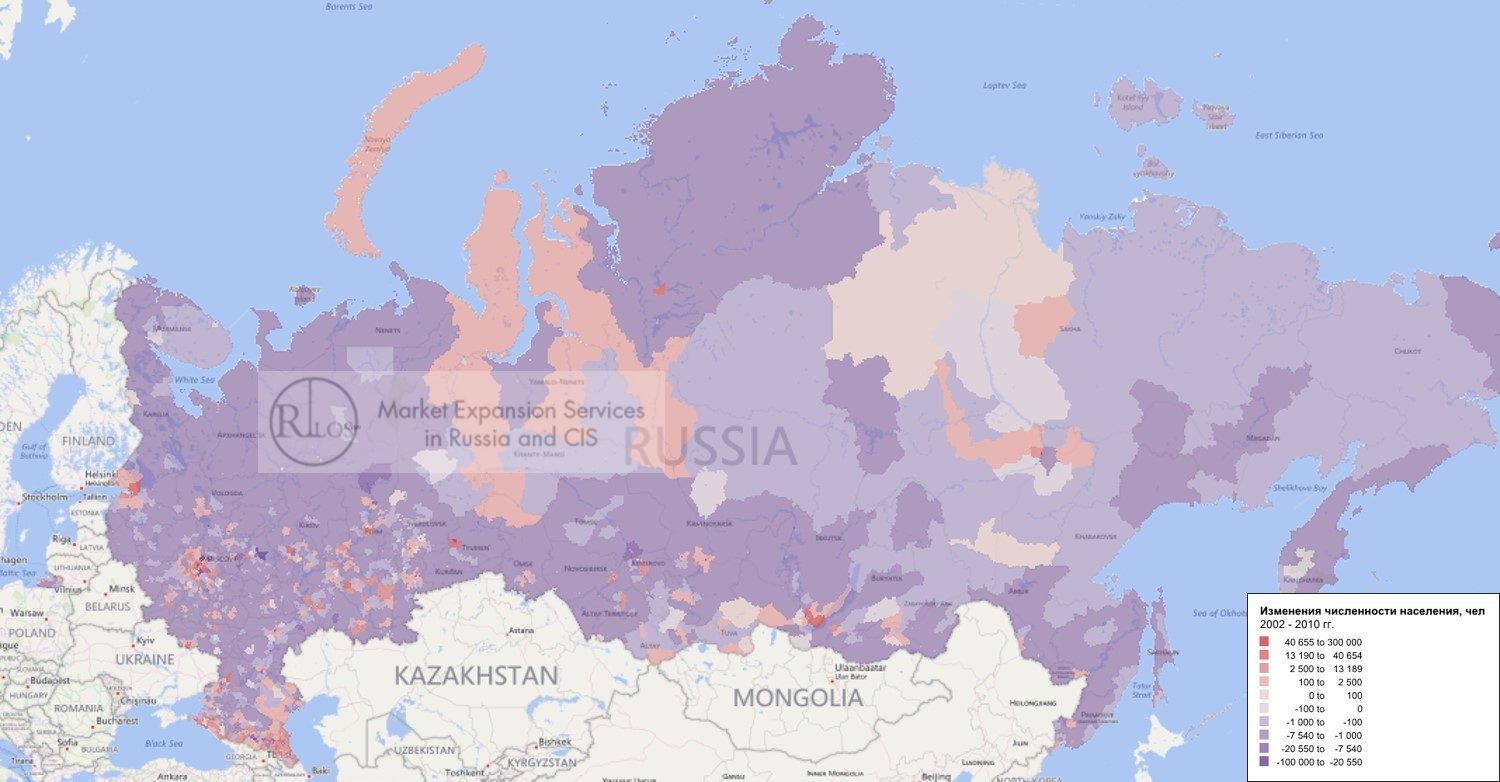 The main factors which influence the evolution of Russia’s population are a negative natural decline along with internal and international migration.

The trend of a decreasing population can be traced back to the 1990’s and is connected with the collapse of the Soviet Union, which caused a turbulence among all social-economic spheres of life that influence population growth. The sharp reduction of government investments in social spheres of life caused an increase of the death coefficient, especially for men aged between 16-60.  The economic crisis and a lack of perspective negatively influenced the plans of expanding a family, which resulted in the decrease of the birthrate to 1.4 in 2009, while in 1989 it was 2.00.

Despite the efforts of the Russian government, introducing “mother fund” (in 2007) was aimed at stabilizing the population (which can be achieved only when the birth coefficient equals 2.1) which proved to be a difficult and almost impossible mission to bring the population out of the demographic dip.

It is possible to distinguish three main obstacles which stand in the way in achieving demographic stability in the Russian Federation. First, the general trend of the birthrate decay, which is common in most developed European countries since the 80’s.

Second, is the size of women population being in the appropriate age for giving birth is declining (due to a low birth rate in the 90’s).  Graph 1 is an illustration of a demographic dip/hole formed in the 1990’s.

Third, is a lack of a proper  attitude of the population regarding  their health, diagnostics and modern medical treatment.  This leads to a significantly high death rate. In Russia the current indicator is 15,5 per one thousand people, which is 50% higher than in Western Europe (10,0) according to the French National Institute of Statistics (INSEE).

Migration is an equally important factor influencing the dynamics of a population. Firstly, this is intraregional migration, reflecting the general trend of the population moving from the periphery to urban centers. An example of such a migration is Sverdlovsk region, which population decreased dramatically (- 210 998 people), while its actively developing administrative center, the city of Yekaterinburg grew ( +42,983 people).

In comparison with the 1990’s the amount of migrants between 2002-2010 decreased.  The general trend for interregional and international migration is the movement of people from eastern and northern region of Russia and from its neighbouring countries (Republics of South Caucasus and Central Asian Republics) to Moscow, Moscow Region and the south-western parts of the Russian Federation.

Map-3: Population Dynamics on the level of districts, city and municipal districts in Moscow 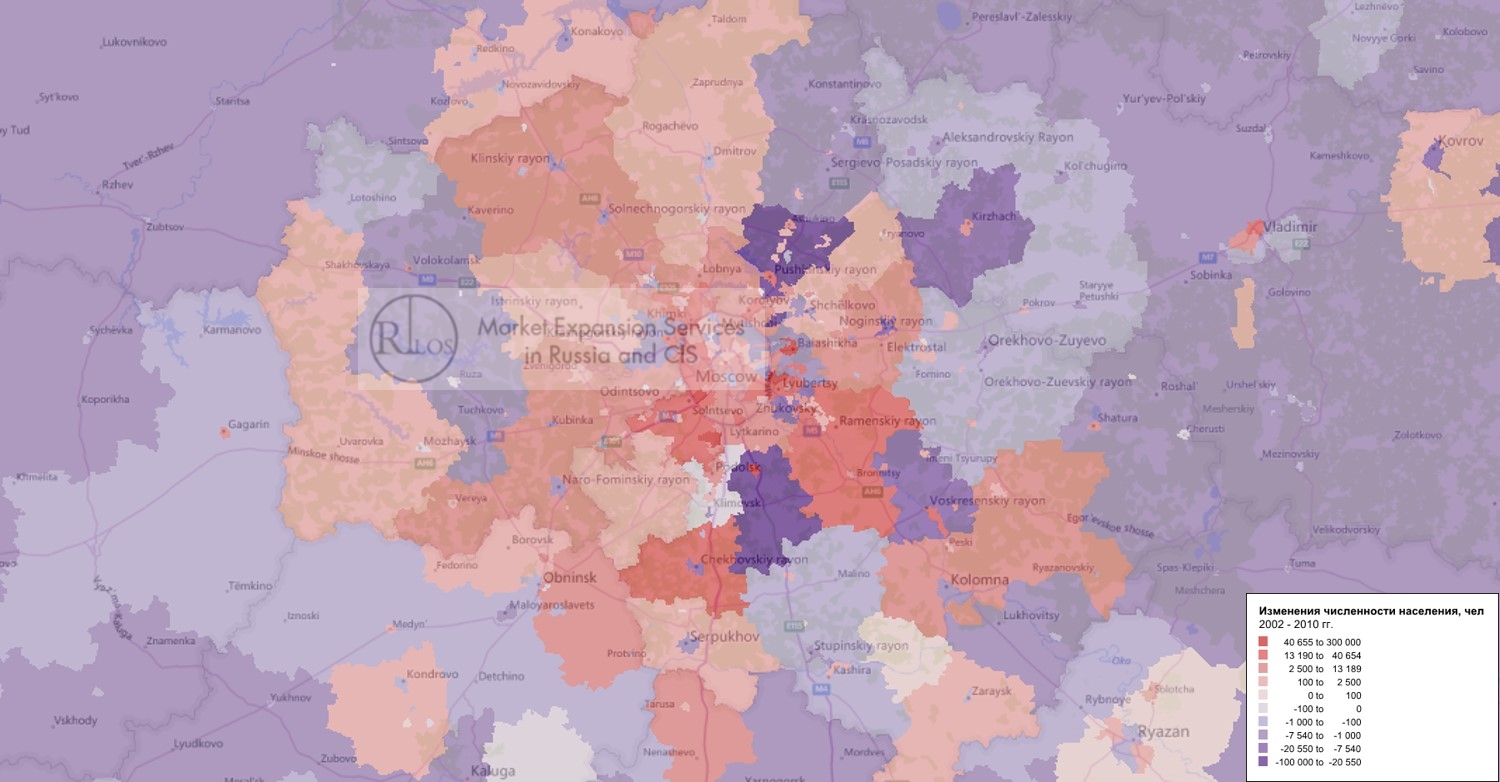 In Moscow the population noticeably increased in South Butevo area (+73 777 people) and Kosino-Ukhtomskiy (+56 129 people). The most Moscow region population growth was fixed in the cities of Balashikha (+44 196 people) and Domodedovo (+42 043 people).

On the coast of Krasnodarskiy Krai, the Russian Riviera, an increase of the population was observed in the cities of Anapa (+15 604 people), Gelendzhik (+17 041 people) and Sochi (+22 793 people). In this region the city of Krasnodar grew significantly too (+41 232 people).

Despite the general trend of population migration from the eastern and northern regions the research identified certain exceptions. Cities such as Khanty-Mansiysk  (+25 457 people), Surgut (+21 675 people) and Tyumen (+58 800 people), which extract oil, gas and other natural resources attract a large amount of interregional and international migrations.

Start of works on Geomatrix